Still in the late 1800’s tar was burned in Tuupala. Half of the tar ironworks and the peeled wood were left to the storekeeper Kainulainen when the police chief Markkanen sold his stake in the farm in 1878. The merchants living in Tuupala traded tar to Oulu.
There is a tar boat with it’s tar barrels in Tuupala museum. 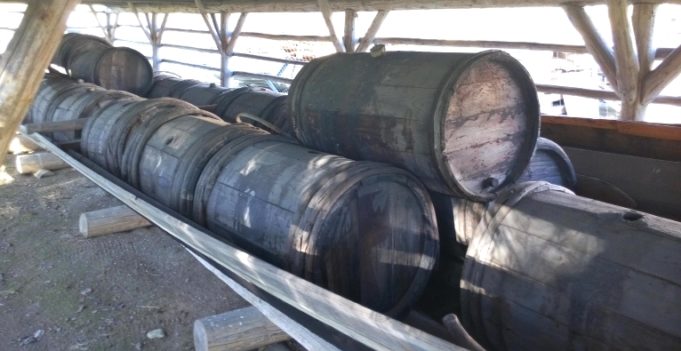 Kuhmo was the centre for commercial tar burning in Finland in the end of the 19th and the beginning of the 20th century. The production died down after the first years of the 20th century. Steel plates replaced planks, which needed tar, in shipbuilding. Sailboats made way for more modern boats, which reduced the need for tar used to protect the rigs.

Tar boats were used to transport tar from Kuhmo to Oulu and later to Kajaani. At first the rivers were only accessible for four-barrel cargoes. Later the rapids were cleaned out and a 25-barrel tar boat could be used. Such barrels weighed about 150 kilograms each.

The oarsmen sat at the front and the back of the boat using oars. At the back was also a place for the steersman beside a big, wide paddle, which was tied to the boat with withes. When the wind was favourable, especially at Lake Oulujärvi, a big square sail was raised. At other times the oarsmen rowed as hard as they could. Quite often one of the oarsmen was a woman, who also worked as the cook. The trip from Kuhmo to Oulu and back took two weeks, even four when the wind was against you.

In the most dangerous rapids the boats were steered by sworn steersmen for a fee. There were even some rapids so dangerous, that the cargo was transported on land. The boat crew then guided the boat through these dangerous waters.

When you were going upstream, you pushed the boat along or pulled the boat from the shore using ropes. Even horses were sometimes used, if the road went along the river. For example in river Pajakkakoski there was a “möljä” (a bank lined with stones) to make it easier to pull the boat.

Measurements for a tar boat from Kuhmo:

When a tar boat was fully loaded, the centre part was only a few centimetres over water level. Extra planks (so-called “varpe”) were added on top of the sides and bound with withes. When an empty boat returned home, these planks were removed.